Why does 64 = 65? What kind of a question is that? Any pre-schooler probably knows that 64 doesn't equal 65. Algebra clearly shows that they are not equal. However, geometry might throw us off track.

Let's take a chessboard. It's an 8 x 8 grid, with a total area of 64 square units. I'd like you to make the following cuts in the chessboard, as well as along the 5th row from the top (3rd row from the bottom). 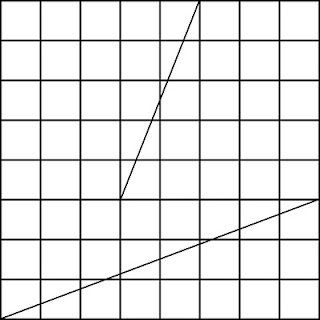 Even I completely understand that this is completely invalid. However, I still can't wrap my head around why it is wrong. I've been told that the squares along the cut after you assemble the shape are not valid squares, which is the only thing that seems accurate. However, with this, I just find it fascinating to take knowledge you learned in kindergarten, or even pre-school, is being challenged with this very contradictory proof.

I also saw this as a proof of last week's maneuver with Fibonacci numbers. I am not quite sure of why, but it does make some sense, that you are turning eight squared into thirteen times five. It does work again with a 5x5 or 13x13 grid, as long as you make the correct cuts.

Region Revenge: In August, I gave you guys a problem called region revenge. The goal was to find its explicit formula. The answer 2^n-1 is incorrect, as the sixth cut can only make 31 regions, the seventh makes 57, and so on. Here is the correct answer:

You could have solved this with the techniques we used for the other problems, just by creating a five way system.
Posted by Ethan Brown at 3:00 PM