The Math of Your Locker

Since school just ended, my mind is kind of on clearing out my locker. So, I thought that for today’s post, I would talk about some math that deals with lockers.

First off, picking lockers. We usually have a locker combination to prevent thieves from breaking in. Some thieves can enter a locker combination in a second.
Let’s say you have three dials, each with a number from one to six on it. Your combination is three numbers between one and six. So, there are 6 x 6 x 6 possible combinations.
6 x 6 x 6 = 216
Pretend this thief went to your locker and tried every single combination. If they can do a second per combination, they will be getting in in under four minutes.
216 ÷ 60 = 3.6 = 3:36
Because of probability, it should only take half this time, meaning that a thief could break into your locker in under two minutes.
Don’t get scared. For a four dial locker with numbers from 1-10, it would take over an hour to break in. I just find it cool how small the numbers are for the three dial locker.
Secondly, I would like to share a problem I learned in fifth grade. As usual, I will post the answer in a month. This will be good practice for the problem of the week beginning on Monday.
There is a school with 1000 students and 1000 lockers. Student one runs through the school and opens every locker. Student two runs through the school and closes every second locker. Student three runs through the school and opens/closes every third locker and so on. If all 1000 students go through the school the same way, which lockers are left open. Is there a pattern they follow?

Our problem of the week is back! If you were not following Cool Math Stuff last summer, let me explain. In the summer, each month, I will create two very long problems: an easy problem and a hard problem. Problems so long that it takes five days to figure out the answer. Each day, I will post the next part of the problems for you to solve. After the five days, you will have a month to determine the answers. I will post the answers on the Saturday's post following the next month's problem of the week.

Last year, there was guidance with the problem. This year, I am going to make it a little more challenging. For June, there will be the same level of guidance as last year. July, I will be taking it down a notch. You will have some hints (maybe the important formulas, or some calculator buttons to look for), but no in-depth instruction like before. In August, it's all you. There will be a problem, and an answer the next September.

Also, I gave you a KenKen puzzle a month ago (maybe a little more). Here is the answer: 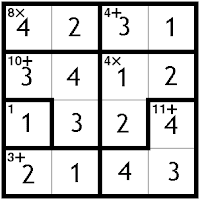