One of the most famous mathematicians of all time is the German mathematician Carl Friedrich Gauss (1777 - 1855). Gauss was one of the leading number theorists of all time, as well as a contributor to algebra, statistics, geometry, analysis, and applied mathematics. 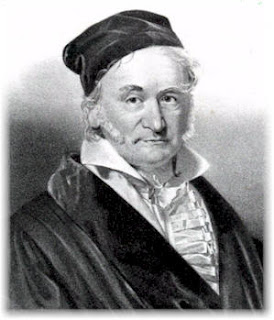 There is a piece of mathematical folklore (which may or may not be 100% accurate) that involved a child Gauss. It is a great story, highlights a great point, and shows the intelligence of a great mathematician.

A fifth grade teacher is teaching a class, and started to get frustrated with the students. So, in an attempt to punish them, she demanded that they add up all of the numbers from 1 to 100. This is a daunting task for the average person. She expected to have the students start working on the problem, and she could leave and take a break.

As she was about to walk out the door, the young Gauss raised his hand and declared that the answer is 5050. The teacher was stunned. After checking his work, they found that 5050 was the correct answer.

How did he do it? Well, he visualized a horizontal line with all 100 numbers:

And then he took the second half of that line (51 - 100) and flipped it around underneath to look like so:

I think this is a great story when it comes to historical mathematicians, regardless of how true it is. Gauss did go on to study triangular numbers, which are the sums of consecutive integers up to a point. And since triangular numbers are absolutely fascinating, this story is a great way to begin an endeavor in that topic.
Posted by Ethan Brown at 12:00 PM No comments: 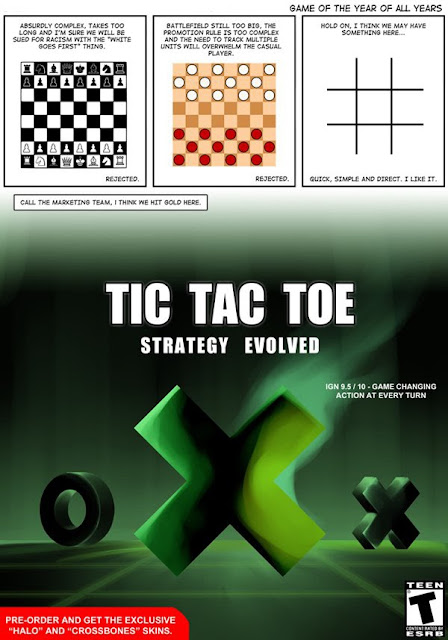 We've all heard of the game tic-tac-toe. It's easy to set up, simple to understand, and fun to play. All you have to do is get three in a row.

There is some mathematics behind correct play of tic-tac-toe, but the real goal is to see where the other player has a chance of forcing a win and make sure that doesn't happen.

However, there is an interesting mathematical fact in the game "anti tic-tac-toe." This is where you have to avoid getting three in a row.

Let's start in the left corner square and see what happens.


Since O wants to see X get three in a row, they will get as out of the way as possible.


Now, where are X's safest moves? Well, if X moves in any of the squares with asterisks, then it would give them two in a row, which would put them closer to a loss. So, X's best move is in the bottom side square.

Now, O would probably go in the top side square to keep out of having 2 in a row.

Now, X's best move is in the top right corner, since all other squares would have an asterisk.

In this instance, the only technically "safe" move for O is in the bottom left corner, but you can see that this move eliminates 3 possible three in a rows for X. Since the bottom right corner is pretty safe too, O's best move would be there.

You might notice that in this game, X has a huge disadvantage. O has one less letter to put down, so it is impossible for X to win against a rational player. However, X can force a tie.

Eight of the squares on the board are a guaranteed loss for X. If X moves there on the first turn, O should be able to succeed. However, this ninth square is a square that X can move to and O will not be able to force three in a row.

Which square is it? It is the one that would never be suspected: the center square. Earlier, we said that the center square has so many losing possibilities that nobody would consider it. But, it is actually the right move. Let's look at it.


Currently, there is no specific square that O would have an advantage in. Let's say they went in the top left corner square.

Then, X would play the bottom right corner square. This would be the symmetrical move.

X would continue playing the symmetrical move through the whole game. With any logical player, this would result in a draw.

Though anti tic-tac-toe wouldn't be a popular game to play, there are much more fun games that use symmetric properties to force ties/wins like nim or cram. Here is another game with this type of strategy called napkin chess that I learned on the show Scam School which can also be turned into a fun game with friends:

About a month ago, I was speaking at a TEDx conference that was themed around education. During these TEDx conferences, there are always live speakers as well as videos chosen by the organizers that fit well with the occasion. One of the videos we watched really got us thinking. Here it is:

For example, the mathematician Euclid had nothing. He pretty much was starting from scratch, just like the kids described in the talk. So what did he do? Well, after creating five axioms (foundational ideas that can be concluded with basic logic), he started asking questions, and answering them with mathematical proofs. He would then think about other questions, and find ways to answer them using everything he had discovered. This was the basis of his book series called Elements.

Students should be able to approach math in a similar way. A teacher could lay out five axioms (or develop them with the students), and then back off. He or she might also provide terminology (line, triangle, square, circle, angle, bisect, trisect, etc.), but the students can discover the rest. By learning math this way, they will understand everything they are doing so much better because they created it. For more on that topic, check out my Capstone Research Paper (link is on the top of the page), and scroll to "Chronological Cognition."
Posted by Ethan Brown at 12:00 PM No comments:

Email ThisBlogThis!Share to TwitterShare to FacebookShare to Pinterest
Labels: Basic, Geometry, Math in the News, Proofs

This is where you use the Law of Sines. This law goes as follows:

This was taught to me last year in school, and I immediately wondered what the proof was. Though the law of cosines one was a bit clunky, I found that this proof was quite simple and elegant. So, I thought that it would be great to share.

Since it would require many diagrams, I thought it would be easier to just watch a video of it. It is pretty short, and explains the proof well.

A big part of the reason why most of the cool stuff I post isn't taught in school is that it is not mandated in the curriculum or test standards. Of course, I do believe there are changes that need to be made to these (click here for my Capstone research paper explaining those). However, the Law of Sines is something already taught in school. Same with the Law of Cosines.

These proofs, especially the sine one, fit right into the curriculum. The Law of Sines is already being taught, so why not take an extra 5 minutes to explain the proof? Or even better, explain the basic thought process behind the proof and have the students generate the formula (which works really well for the Quadratic Formula as well). This increases the students' ability to understand and apply the concept, as well as making it fun and interesting. On top of that, the common core standards do want students able to "construct viable arguments," which is the whole purpose of proofs. I think that this proof is not only interesting, but shows that cool math stuff can be integrated into the classroom while keeping it relevant and obedient to the standards.
Posted by Ethan Brown at 12:00 PM 1 comment: