Click here to see part 1 of this four week series.

This week is week two in a four week series on the Gambler's Ruin Problem. Unlike my series on the proof to Bertrand's Postulate, this one can be started in the middle if you have an understanding of some elementary probability concepts like expected value. It will take away some of the initial surprise when faced with the probability of success in previous games, but it is not like Bertrand's Postulate where I am recalling or building upon information that was developed in an earlier post. They are all very separate pieces of information that can be understood on their own or together as an attempt at the Gambler's Ruin Problem.

The idea of the Gambler's Ruin Problem is simple. Here is the problem if you have forgotten it:

Last week, we discovered that roulette loses on average 5.3¢ per dollar bet, which gives you a shockingly low 1.3% chance of reaching your goal of $100.

We have found all of the necessary data with roulette, and odds didn't look great. So let's try another game. This week we will look at craps, which is one of the most popular casino games involving dice. 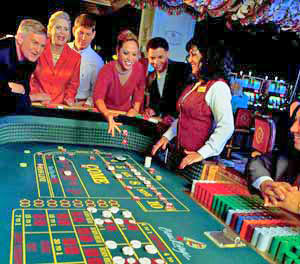 The rules of craps take a couple minutes to remember in its entirety, but are pretty easy to understand.  This explanation comes from bigmcasino.com, which laid them out very well.
The players take turn rolling two dice. The player that is rolling the dice is considered the shooter. The shooter MUST bet at least the table minimum on either the pass line or the don’t pass line.
The game is played in rounds consisting of two phases: come out and point.
Come Out – to start a round, the shooter makes a “come out” roll
If the come out roll is a 2, 3, or 12, then the round ends. The rules of craps state that the shooter is said to “crap out” and players lose their pass line bets.
If the come out roll is a 7 or 11, this results in a win for pass line bets.
The shooter continues to make come out rolls until he rolls 4, 5, 6, 8, 9, or 10. This number becomes the point and in turn the point phase begins.
Point – during this phase, if the shooter rolls a point number then it’s a win for the pass line bets. If the shooter rolls a seven, it’s a loss for the pass line bets and the round is over. 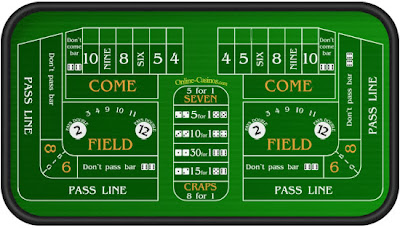 There are many different bets that can be made in craps, but each can be analyzed through probability. I don't have nearly enough time and energy to go through them all, but I will discuss a few.
The most common craps bet is the pass line bet. This is the one discussed in the rules that wins on a seven, eleven, or the roll of the point number. To figure out its odds, we can just create a table of percentages for each of the eleven possible dice totals, determine the probability of winning the pass line bet, and perform an expected value equation like we mastered last week.

I have already put in the ones that we know from the craps rules. The other six become point rolls and need to appear before a seven. Here are the possible roll totals from two dice: 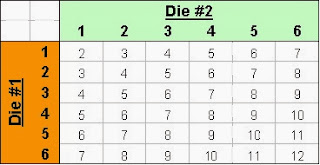 Let's start with determining the odds for four. There are three ways to roll a four, six ways to roll a seven, and twenty-seven ways to roll something else. To determine the odds of success with a four, there are a few different methods. We will use a more logical method the first time, and then discover a quicker method to figure out the rest.

Adding this infinite series up will give the following:

So your probability when rolling a four is 1/3. That way was the most direct way to calculate it, but also a little complicated and requiring some basic knowledge of infinite series. A much easier approach would be to realize that the remaining 27 options have no significance as to your success. There are 3 good rolls and 6 bad rolls and that is all that matters.

So out of the nine total significant rolls, three of them are winners. Using this logic, the odds for success would be 3/9, or 1/3 as discovered before. Either method generates a 1/3 chance of success.

Using the approach we just discovered, we can very quickly determine the odds for the other totals and complete the table from before.


This could then be used to determine the probability of winning the pass line bet. Keep in mind that it is not averaging the eleven totals, but multiplying their odds by roll frequency.

There is about a 49.293% chance of winning the pass line bet. Let's see what our expected value is when we make a dollar bet.

A pass line bet in craps has an average loss of 1.4¢, which is much better than the 5.3¢ loss we continued to see in roulette. But are there other bets in craps that beat that?

Another bet in craps is called the don't pass line. This is pretty much betting that the shooter will lose rather than the shooter winning. Seems fair, right? It actually seems pretty favorable. But before you bet your mortgage payment on it, keep in mind one little rule. If the shooter rolls a twelve on his come out roll, then it is a push. In other words, a roll of twelve will not be included in the table or equations.

With this minuscule adjustment of pushing a twelve, this bet actually becomes less favorable than the pass line bet. Rather than losing 1.4¢ on average, you would lose 4.1¢. Still better odds than roulette, but why bet against the shooter when you are benefiting more by betting for him?

There are many more bets in craps that I don't have the time to go through, but I would encourage you to perform the calculations with some of them. If you play craps at the casino, try taking one of your favorite bets and see if it measures up to the pass line bet or other options either within craps or in other casino games. Here are a few different options:

Place Bets are bets on a specific number. After the come out roll, if your number appears before a seven, you win the bet. Place bets on a six or eight pay 7:6, bets on a five or nine pay 7:5, and bets on a four or ten pay 9:5.

Place to Lose Bets are bets against a specific number. After the come out roll, if a seven appears before your number, you win the bet. Place to lose bets on a six or eight pay 4:5, bets on a five or nine pay 5:8, and bets on a four or ten pay 5:11.

Lay Bets are like place to lose bets, except the casino gives you better odds in exchange for a 5% commission fee for making the bet (see buy bets). Lay bets on a six or eight pay 5:6, bets on a five or nine pay 2:3, and bets on a four or ten pay 1:2.

Hard Way Bets are bets on a specific pair (either two 2's, two 3's, two 4's, or two 5's). After the come out roll, if your pair appears before a seven, you win the bet. In the United States (and most other countries) hard way bets on a pair of twos or fives pay 9:1 and bets on a pair of threes or fours pay 7:1.

Hop Bets are bets on a specific combination of numbers (1&4, 3&5, 2&2, etc.), but they only last for one roll. During the point rolls, you can make a hop bet for that turn. If you get your combination, you win. If you don't, you lose that money. Hop bets on a combination with two different numbers (such as 1&4 and 3&5) pay 15:1 and bets on a pair (such as 2&2 and 4&4) pay 30:1. This is different from a hard way bet because the hop bet lasts for one turn while the hard way bet lasts until the shooter gets a seven.

There are still even more bets such as odds bets and proposition bets, but these should be a good start. The most common craps bet is the pass line bet, so we will use this when comparing casino games. Our table of games now looks like:

If you find some craps bets or combinations of bets (ex: pass line/odds - odds bets cannot be placed on their own) that have better odds than the ones we've discussed, please comment your insights. Probability in casino games is always a fun area of mathematics to discuss and debate about.
Posted by Ethan Brown at 12:00 PM