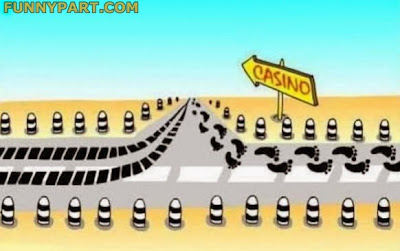 This week is the final week in my series on the Gambler's Ruin Problem, which I have explained again in the paragraph above. We have analyzed roulette, craps, and blackjack, finding out various odds, expected values, and success probabilities. Here is what we have so far:


Let's see how video poker fairs. I chose not to do Texas Hold'em or another popular version of real poker because there is so much strategy involved, and determining a universal statistic is near to impossible. If you are also considering reading players, pot odds, and the occasional bluff, it becomes extremely complicated. However, video poker is another game that is you against the house and can be played with a more concrete strategy like blackjack. Let's go over the rules. 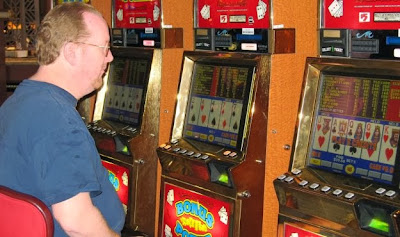 As you can see in the picture, video poker is pretty much a slot machine, except it gives much better odds. The game of poker played on it is five card draw. The player is given five cards to start. They then are given the opportunity to either keep them all, get rid of one, get rid of two, get rid of three, get rid of four, or get rid of all of them. The cards they got rid of are then replaced, and the hand they have left is identified and the proper money exchange is made. If you are unfamiliar with the poker hands, click here. This is the list of odds the casino gives for each hand: 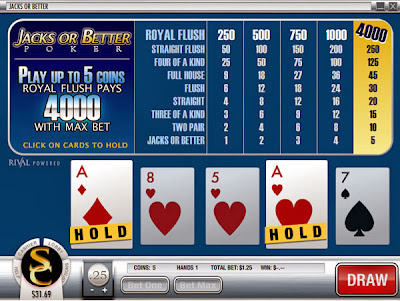 As you can see, the rarer the hand, the bigger the payoff is. This creates the difficulty in choosing which cards to hold and which to discard in any given turn.

I will start by just going through the basic strategy. Then, we will look at some of the exceptions and why they are encouraged.

Pretty simple when it comes to poker strategy. That one won't take up an entire book. Now let's look at some exceptions. The first one is the following:

If four cards are in a straight flush, discard the fifth one (but don't break a straight or flush unless it can become a royal flush)

For instance, take the following example:

Here are the possible hands and their probabilities:

And here are the possible hands and their probabilities for keeping the jacks:

As you can see, keeping the jacks has less of a payoff than this exception. It isn't a huge difference, but still one to take note of.

Here are some other exceptions:

All of those exceptions could be proven with the probability techniques. Using this strategy, you will have very similar odds to blackjack with about a 0.5¢ loss per turn. Most players will lose 4¢ per turn, so this puts us way ahead of the game.


I added an average for Vegas slot machines onto the bottom of our table just to give a taste as to how bad their odds are. Of course, each slot machine varies and I'm not sure how accurate the information I found was for them. But the odds for the games we discussed are all completely based on mathematics and are a lot of fun to play around with. If you play other games in the casino, I'm sure you can determine all of the same information for the Gambler's Ruin Problem and looking for optimal strategy.

So what's the answer to the Gambler's Ruin Problem? I don't know. We took a close look at many different games, but we can never have enough information to have a solid answer. There are dozens of different games and bets out there, many of whom can't be completely analyzed with probability and game theory. But this problem is a gateway to having fun with numbers and probability to make yourself a better player at the casino and learn a bit about mathematics. I hope some of the things we've learned in the last month become useful to you next time you have sixty bucks in a city with a casino.
Posted by Ethan Brown at 12:00 PM